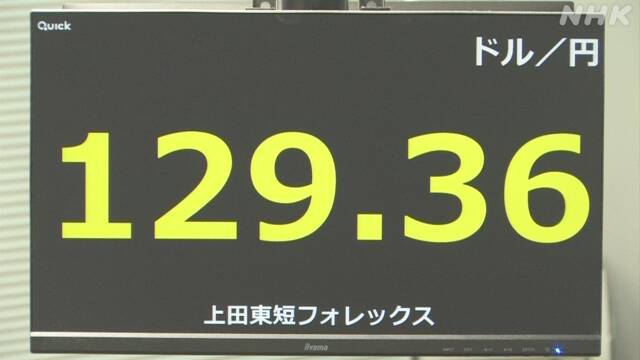 In the Tokyo foreign exchange market on the 20th of April, the yen was sold, and the dollar was bought against the backdrop of the widening interest rate differential between Japan and the United States. The price has dropped to the first half of the yen.

The yen exchange rate is in the overseas market on the morning of 20th of April, and from the view that the interest rate differential between Japan and the United States will widen due to the rise in long-term interest rates in the United States, the movement to buy dollars with higher yields and sell yen has intensified, and 1 dollar = 129-yen, The price fell to the yen level, the lowest level in 20 years since April 2002.

In response to this trend, the yen depreciated to the low 129-yen level at one point in the Tokyo foreign exchange market.

Market officials announced that the Bank of Japan would implement a measure called a limit operation to borrow unlimited government bonds at a specified yield to curb the rise in long-term interest rates.

Deputy Chief Cabinet Secretary Isozaki "I want to watch with a sense of tension."

At a press conference, Deputy Chief Cabinet Secretary Isozaki said, “We have traditionally refrained from commenting on market levels, but we believe that foreign exchange stability is extremely important and that rapid fluctuations are not particularly desirable. I would like to pay close attention to the trends in the foreign exchange market and the impact on the Japanese economy, including the recent depreciation of the yen.”

He added, “Forex policy is based on the idea agreed upon by the G7 = seven major countries, and we would like to take appropriate measures as the government while maintaining close communication with the monetary authorities such as the United States.”