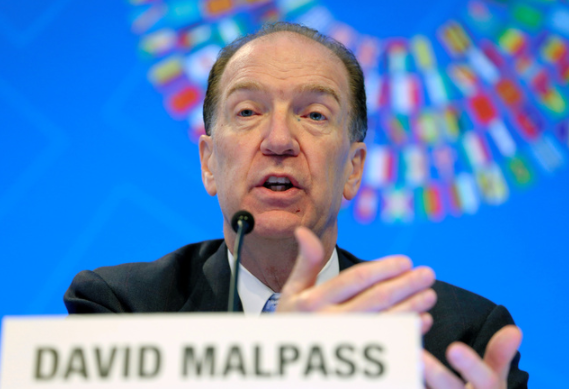 The World Bank said in an economic outlook released on the 5th that the growth rate of the world economy, which was the worst postwar decline in 2020 due to the new corona crisis, will turn to a positive 4% in 2021. However, he also pointed out that "there is a great risk of downward revision" because it is premised on appropriate measures against viruses and the spread of vaccines. It also warned of widening global inequality and the danger of a debt crisis originating in emerging countries.

World Bank Governor David Malpas pointed out at a press conference on the 5th that "the bottom income group was the hardest hit" in the global recession caused by the corona wreck. On the other hand, as asset prices such as stock prices have been supported through large-scale fiscal and monetary policies in developed countries, "a sharp concentration of wealth and income is occurring in the wealthy (with assets)." It was.

The year-on-year growth rate of real gross domestic product (GDP) in 20 years was down 4.3%, slightly higher than the outlook for June last year (down 5.2%), reflecting the recovery of the Chinese economy. Fixed. However, he reiterated his recognition that this recession is "the second most serious in the last 150 years after the two World Wars and the Great Depression." If the spread of vaccines is delayed, the global growth rate in 2009 is expected to increase by only 1.6%.

According to the World Bank's forecast, China has maintained a positive growth of 2% for 20 years, and it looks like a "one-man win" that will rise to 7.9% in 2009. On the other hand, in emerging and developing countries excluding China, the recovery in 20 years will decrease by 5%, and the recovery in 2021 will increase by only 3.4%. Government debt in emerging and developing countries soared in 20 years and is the most serious since the latter half of the 1980s when the debt crisis in South America and other countries became a problem.

The World Bank praised the fact that the 20 major countries/regions (G20) agreed on a framework to reduce or exempt the debt of the poorest countries in November last year, and reiterated the need for international cooperation. After warning that the adverse effects of unemployment and decrease in investment will continue for a long time in the future, investment in "human capital" through education, corporate reform, and diverse and robust product supply network (supply chain) He also appealed for the need for construction.