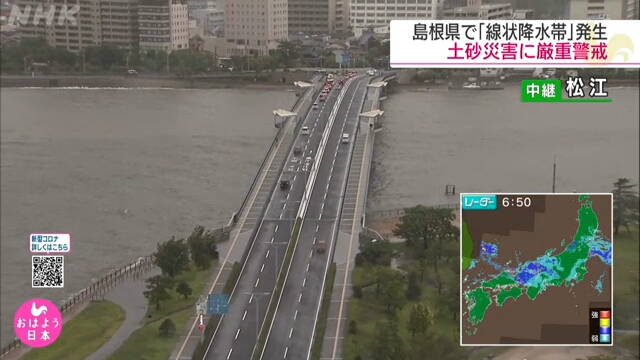 Japan's Meteorological Agency is urging people in Tottori and Shimane Prefectures on the Sea of Japan coast to be on the alert for landslides and floods.

The agency says it detected a band of rain clouds that have developed over the Sanin and Hokuriku regions along the Sea of Japan.

The agency issued a warning in the form of information on heavy rain inundation and landslides for Tottori and Shimane on Wednesday morning.

Weather officials are warning of landslides in the prefectures of Shimane, Tottori, and Fukui, as well as flooded rivers in Shimane.

Torrential rain has been pouring down on areas near the city of Matsue, Shimane Prefecture, prompting officials to issue a record one-hour rainfall alert.

A Level Five warning -- the highest on the one to five scale -- has been issued for residents in the Hiyoshi district of Yakumo Town in Matsue City.

The warning alerts people of the need to "secure safety immediately." It also urges people who cannot evacuate to take steps to protect their lives. It advises those individuals to move to a safer place in their homes, such as a high floor, or to an area away from a mountain side.