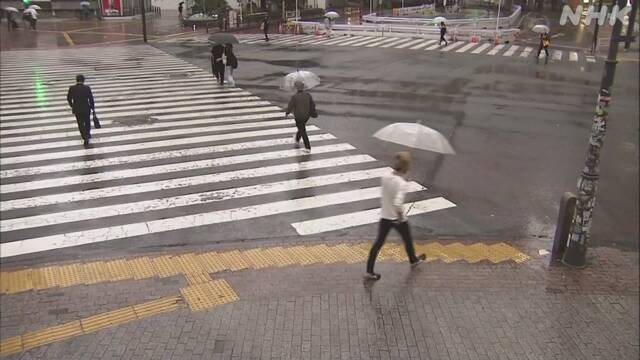 Tomorrow, there is a risk of heavy rain mainly on the pacific side of west and eastern Japan

Due to the influence of fronts and low pressure, developed rain clouds are spotted on Kanto and Tokai regions. Over May 14th, heavy rains may occur intermittently, especially on the Pacific side of western and eastern of Japan, and the Japan Meteorological Agency is calling for careful attention to sediment-related disasters and inundation of low land.

According to the Japan Meteorological Agency, it rains mainly in eastern Japan due to the influence of fronts and low-pressure systems, and developed rain clouds hang in the Kanto and Tokai regions.

Rain continues in western Japan, in Miyazaki and Kochi prefectures, the amount of rainfall since the beginning of the rain on the 10th of this month has exceeded 200mm.

On May 14th, another low-pressure system was generated on the front line in the sea west of Kyushu and proceeded along the pacific coast, so the atmospheric condition became unstable mainly on the pacific side of western Japan and eastern Japan, and it rained intermittently over a wide range. It is expected to strengthen.

Heavy rains are accompanied by lightning, and locally, extremely heavy rains of 50 mm or more per hour can cause heavy rains.

The amount of rain in the 24 hours until the morning of May 14th is expected to be 200 mm in Tokai, 180 mm in southern Kyushu and Kinki, and 150 mm in Okinawa, Amami, Shikoku and Kanto.

The Japan Meteorological Agency pays close attention to sediment-related disasters, inundation of low land, flooding of rivers, and also calls attention to severe gusts such as lightning strikes and tornadoes.

The time when it rains heavily may overlap with the time when you commute to work or school in the morning, so please be sure to act with plenty of time.