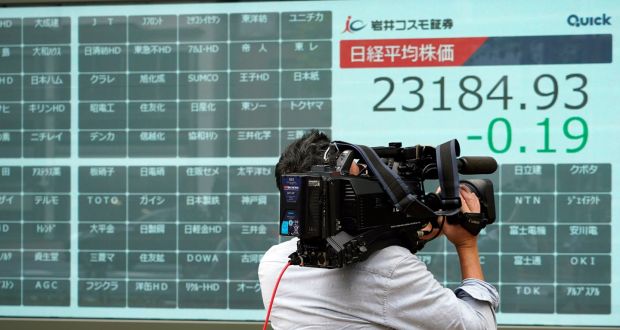 A reporter is recording the glitch happened at the Tokyo Stock Exchange. (Image via The Irish Times)

The full-day suspension at the Tokyo Stock Exchange last Thursday really did a massive blow over Japan. Tokyo now has slipped to the fourth place of the world's leading financial hubs with Shanghai has snatched Tokyo's position following New York and London. The report was based on the Global Financial Centers Index, a report, evaluating the future competitiveness of 111 major financial centers around the world, compiled by London-based think-tank Z/Yen Group and China Development Institute in Shenzhen, Southern China. Meanwhile, Hong Kong and Singapore moved to the fifth and sixth places respectively.

Previously in March, Tokyo snatched third place in the index after ranking sixth in September 2019. Yes, the report is updated biannually every March and September. The Tokyo government has been struggling to enhance its city's appeal as a global financial hub by cooperating with major banks and real estate companies to attract foreign institutions and talents. However, the Tokyo Stock Exchange experienced a glitch in its electronic trading system last Thursday, causing the worst failure in the world's third-largest bourse.

Furthermore, the 28th edition report, released in late September, stated that financial centers in Asia and the Pacific had mixed performances. About 10 cities were falling and 14 were rising in the ranking. Singapore, Beijing, and San Francisco's place remained in the index, while Shenzhen and Zurich entered the too 10, toppling Los Angeles and Geneva. Fostering the financial technology (fintech) industry, New York topped the index, followed by Beijing, Shanghai, London, and Shenzhen. Currently, five of the top 10 fintech centers are China-based.