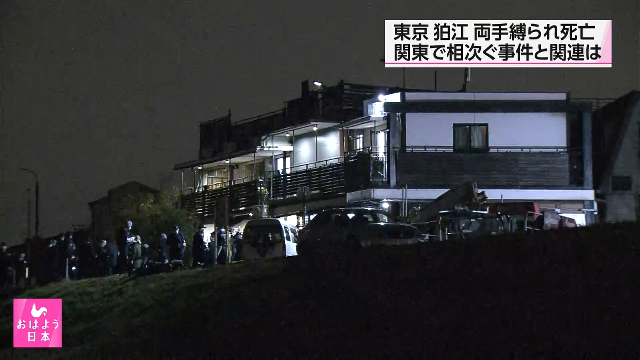 Tokyo police have launched a robbery and murder investigation after a 90-year-old woman was found dead at her home. A spate of similar robberies have occurred in the Kanto region this month.

Police found Oshio Kinuyo lying in the basement of her house in Komae City shortly after 5:00 p.m. on Thursday. She was later confirmed dead.

The officers went to the house after receiving information from police in neighboring Chiba Prefecture that it had apparently been the target of a robbery.

Police say Oshio was bleeding from her face with her hands tied. Rooms on the first and second floors had been ransacked.

Oshio's son and his wife as well as two grandchildren also live in the house. They were reportedly all out on Thursday morning and say Oshio was not in the basement when they left home.

Five similar robberies have occurred this month in the Kanto region, including Ibaraki and Kanagawa prefectures. They involved a group of three people who broke into houses and took cash.

In Chiba Prefecture, shops were also targeted for robbery by a group of suspects.

Police are investigating if there are any links between these cases.