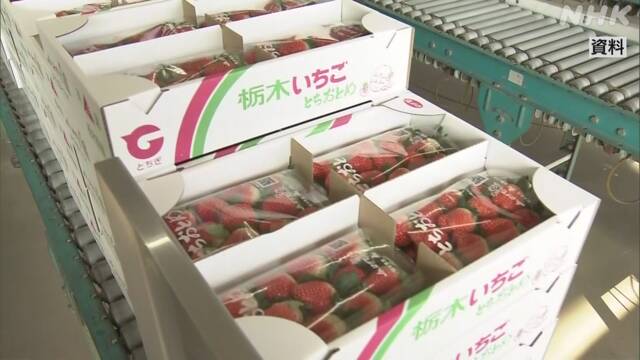 The shipment volume of strawberries, which is a specialty of Tochigi Prefecture, has reached more than 20,000 tons this season, and is expected to maintain the number one position in Japan for 34 consecutive years.

According to Tochigi Prefecture, the amounts of strawberries produced in the prefecture shipped through JA this season from October to the end of May last year was 20,374 tons, a decrease of 1% from the previous season.

On the other hand, the sales amount is expected to reach a record high of 26,420 million yen, and increase of 10% from last year.

On the other hand,

Ø    The popular “Skyberry” for gifts is 1340 tons, which is higher than the previous season, also

Ø  “Tochiaika”, which is the second season after full scale cultivation, weight 2515 tons, which is about three times as much as the previous season.

According to the local JA, Fukuoka Prefecture, which is the second largest in Japan every year, has shipped only 10,207 tons this season, so Tochigi Prefecture is expected to maintain the highest shipment volume in Japan for 34 consecutive years.