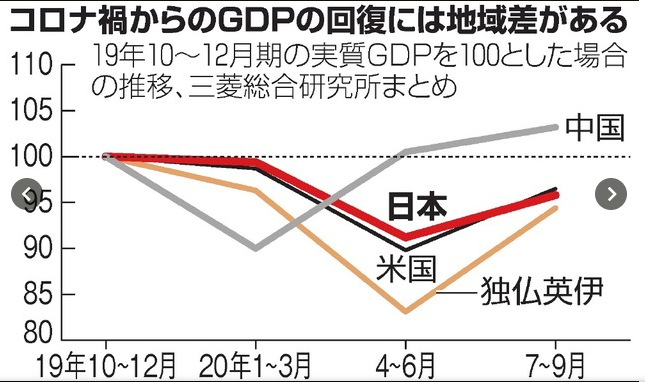 The World's Economy is recovering, yet China is concerned about the re-spreading the infection

Gross domestic product (GDP) in the July-September quarter, which was noted for its recovery from the corona crisis, exceeded the private sector's expectations in advance and achieved record positive growth. With the resumption of economic activity, the "recovery" of consumption and exports has expanded. However, there is a strong side of autonomous repulsion from the previous plunge, and it is expected that recovery will be suddenly braked in the future. The re-expansion of infections at home and abroad is also a cause for concern, and voices calling for the government to support the economy are likely to increase.

In the July-September period, after the first peek of the corona disaster, a rapid economic recovery was seen worldwide. However, only China has returned to the level of gross domestic product (GDP) before the Corona. Infections are gaining momentum again in many countries, and a full-scale recovery remains uncertain.

In the United States, which accounts for a quarter of the world's GDP, the real growth rate for the July-September period was 33.1% per annum, the highest after the war. Although the employment environment is harsh, personal consumption has been boosted, supported by huge policy support such as cash benefits and expansion of unemployment insurance. Even so, the decline in the previous term (annual decrease of 31.4%) cannot be compensated for, and GDP remains at a level 3.5% lower than the October-December quarter of last year before Corona.

Even in Europe, where the “lockdown” that severely restricts going outspread in the spring of this year, the decline was particularly large, France increased by 95.4% annually (down 44.6% in the previous fiscal year) and the United Kingdom 78 in the July-September quarter.・ A sharp rebound with a 0% increase (58.7% decrease in the previous term). However, the GDP of the four countries of Germany, France, Britain, and Italy is 5.6% lower than the period from October to December last year.

In Japan, the decline in the April-June period was smaller than in the US and Europe, but the return in the July-September period was rather slow, and the level was 4.2% lower than in October-December last year.