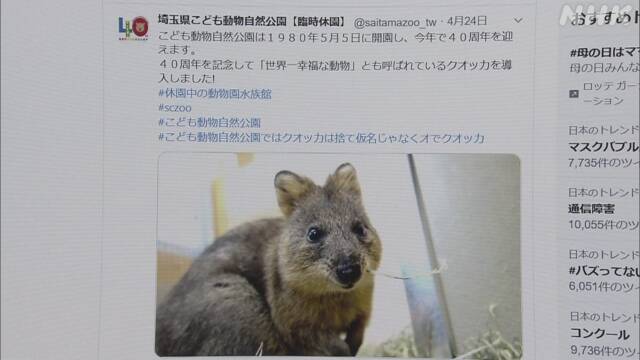 SNS of Quokka "The Happiest Animal in The World"

Quokka, a kangaroo companion who also called the “happiest animal in the world” with a look that looks like laughing, has appeared in a zoo in Higashimatsuyama City, Saitama Prefecture. At the zoo, which has been closed for a long time due to the new coronavirus, the zoo has begun efforts to transmit the lovely daily life of Quokka via SNS.

Quokka, a kangaroo family animal that lives in Australia, is bred at the Children's Nature Park in Higashimatsuyama City. To commemorate the 40th anniversary of the opening of the zoo this year, in March, four males and two females were donated by the Australian Zoo. Because Corona lot of retail or even zoo have to crisis condition, because of that Australian Zoo have to reduced animal who have lot of population, like this Quokka. In the worst scenario maybe herbivore will be replaced as meat for carnivore. Because of that Australian Zoo donated Quokka for Children’s Nature Park in Higashimatsuyama City.

Those who saw the state of Quokka eating and moving around received comments such as "Healed" or "I want to go see it soon." At the zoo, the local vegetation is being planted in outdoor breeding spaces, and the four Quokka are gradually getting used to the new environment.