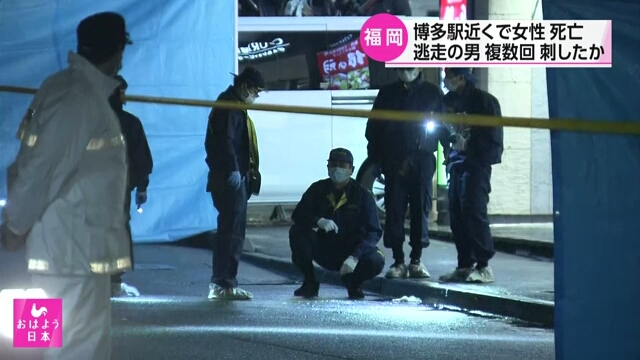 The woman, who is believed to be in her 30s, was attacked by a man with a knife on the street near JR Hakata Station in Fukuoka City, southwestern Japan, on Monday evening.

She was rushed to a hospital, but later confirmed dead.

The police are searching for the man who fled the scene on suspicion of murder.

The police say the man is believed to be between his 30s and 50s. At the time, he was wearing a dark outfit and carrying a bag and what appeared to be a knife.

Eyewitnesses told police that the man stabbed the woman multiple times and sat astride the victim.

The police suspect the suspect could have been personally acquainted with the woman as he apparently attacked her with a strong intent to kill.

People living or working near the site expressed anxiety on Tuesday morning.

A woman who works at a company nearby said that she was shocked at what happened in her area.

She said that she left the office shortly after 6 p.m. the previous day and saw the site in an uproar. She said she wants police to arrest the suspect as quickly as possible.

A man in his 70s said that he was appalled by the incident as he knows the area very well. He said that people are feeling insecure until the fugitive is caught.