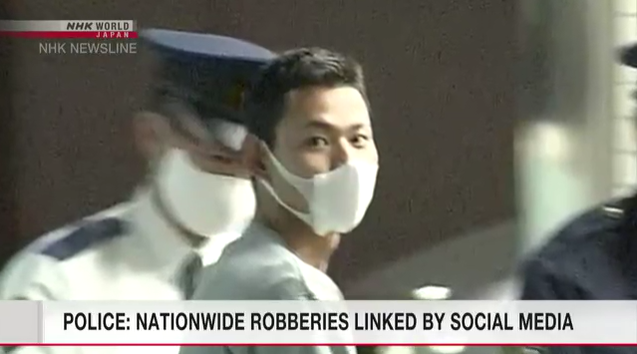 Police in Japan believe a criminal group that has been carrying out a series of violent burglaries in the Tokyo area may be linked to crimes in other parts of the country. They suspect the criminals are using social media to recruit members.

Authorities are investigating after a 90-year-old woman was murdered during a robbery at her home in Tokyo.

One of the vehicles suspected of being involved was captured on a security camera about 200 meters east of the crime scene.

In a separate incident, a man was arrested on suspicion of taking part in a 30-million-yen robbery in Tokyo's Nakano Ward last month that left the victim injured.

Messages on the suspect's mobile phone reportedly show he was communicating about the first incident involving the 90-year-old woman.

Meanwhile, the cell phone data of a Self-Defense Force member who was arrested for another robbery in Chiba Prefecture indicates he was also linked to the murder.

Similar robberies have taken place across the country. Some members of the group are believed to have been involved in an attempted robbery and murder in Hiroshima last month.

The group is also believed to have been involved in robberies last year at residences in Yamaguchi Prefecture and in Tokyo.

Police say at least 13 incidents have occurred in eight prefectures. Authorities are continuing to investigate.