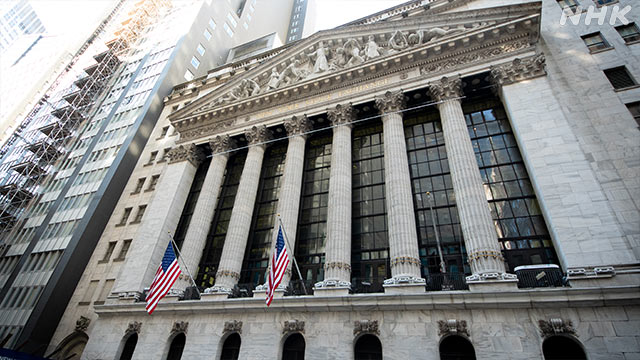 On the 16th, the New York Stock Exchange swelled with sell orders due to caution against a global economic slowdown due to rapid monetary tightening, and the Dow Jones Industrial Average temporarily plummeted to over $ 900. The closing price has fallen below the $ 30,000 mark for the first time in a year and five months, and the market is becoming more turbulent.

In the New York stock market on the 16th, the Federal Reserve Board, the central bank of the United States, made an unusual 0.75% rate hike the day before, followed by the central banks of the United Kingdom and Switzerland on the 16th. The decision to raise interest rates has increased caution against a global economic slowdown due to rapid monetary tightening.

As a result, sell orders swelled over a wide range of stocks, and the Dow Jones Industrial Average temporarily plummeted to over $ 900.

The Nasdaq stock index, which has many IT-related stocks, also plummeted by 4%, setting a new low.

The Dow Jones Industrial Average has risen, supported by large-scale monetary easing even though the economy has been hit by the Corona disaster, but central banks around the world, including the United States, are rushing to tighten monetary policy in order to curb prolonged inflation. It has turned to a downward trend, and the rate of decline since the end of last year has risen to $ 6,400, or 17%.

Market officials said, "The index that shows the business sentiment of the US manufacturing industry announced on this day has deteriorated, and investors have become more willing to avoid risks," said the market turmoil. Is getting deeper.

On the 16th, the stock index fell sharply by more than 3% in the London market and the Frankfurt market in Germany due to a sense of caution about the economic slowdown caused by the rapid monetary tightening.

Stock indexes in major European markets fell 3.3% in the Frankfurt market and 3.1% in the London market, both down more than 3% and 2.3% in the Paris market, compared to the previous day's closing price.

Market officials said, “Investors are trying to avoid risks due to the caution that rapid monetary tightening will cool the economy following the successive rate hikes of the Swiss National Bank and the Bank of England on the 16th. It got stronger.”