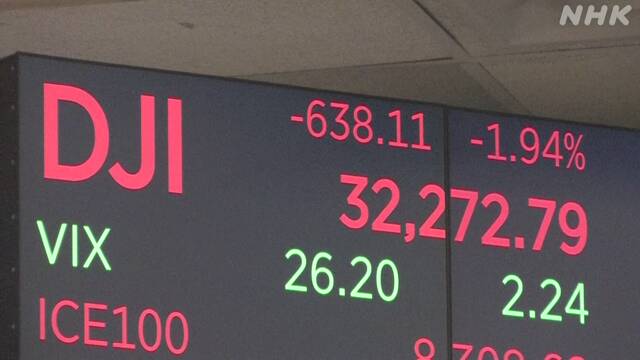 The New York Stock Exchange on June 9th saw a sharp drop in the Dow Jones Industrial Average of more than $600 as sell orders swelled as fear of prolonged inflation increased.

The New York Stock Exchange on June 9th became more cautious about prolonged inflation before the US consumer price index was released on June 10th, and sell orders swelled toward the end of the transaction.

As a result, the closing price of the Dow Jones Industrial Average fell sharply to $32,272,79 cents, a decrease of $638,11 cents from the previous day.

The Nasdaq stock index, which has IT-related stocks, also fell sharply by 2.7%.

Market officials said, “in addition to the widespread view that prolonged inflation will accelerate monetary tightening in the United States, the European central bank’s board meeting on June 9th will raise the policy interest rate to 0.5% next month. Many investors were wary of a slowdown in the economy and placed sell orders, partly because they decided to raise the rate.”