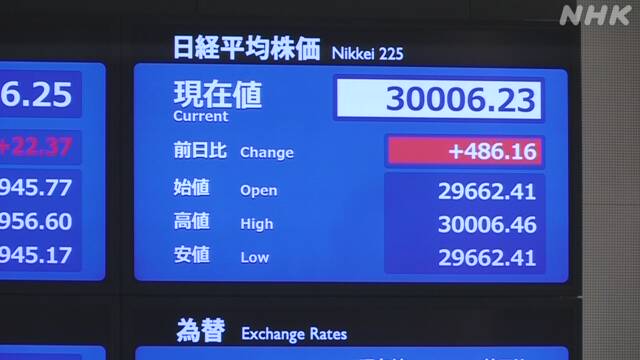 Buy orders swelled on the Tokyo Stock Exchange on the 15th of the week, and the Nikkei Stock Average temporarily hit the 30,000 yen mark. This is the highest trading time in 30 years and 6 months since August 1990.

On the 15th of the week on the Tokyo Stock Exchange, the growth rate of GDP = gross domestic product from October to December last year exceeded the market's expectations, and buy orders expanded immediately after the start of the transaction. Then, after 9:20 am, the Nikkei Stock Average rose by more than 400 yen from the closing price last weekend and reached the 30,000 yen mark. During the trading hours, it was the highest price in 30 years and 6 months since August 1990 in the midst of the so-called “bubble economy”.

After that, there was a sell order to confirm the profit,

▽ The trading volume in the morning was 77.09 million shares.

Behind the continued rise in stock prices are the 200 trillion yen-scale economic measures launched by the US Biden administration as countermeasures against the new coronavirus, and expectations that the global economy will recover due to the spread of vaccines.

Market officials said, "The stock price continues to rise, ahead of investor expectations, but it is unclear whether the economy will recover as expected. The economic situation is so different from the bubble period that it will rise. Some people are wary that the pace may be too fast. " Chief Cabinet Secretary Kato, "Need to pay close attention to the impact of the state of emergency".

Chief Cabinet Secretary Kato said at a press conference in the morning, "Stock price trends are determined in the market by various factors against the background of economic and corporate activities. Current monetary and fiscal policies are supporting the economy as a whole. However, I would like to refrain from commenting on the daily trends in stock prices. "

"The growth rate for the full year of 2020 has fallen sharply since the Lehman shock, and Japan's economy is in a very difficult situation. Since the state of emergency last year, the economy has continued to pick up, but at present We need to keep an eye on the status of the infection and the impact of the issuance of a state of emergency. "

On top of that, "The government wants to protect businesses, employment, and livelihoods by taking priority and effective support measures, and firmly support those who are having difficulties. Comprehensive economic measures and the third of this year, which was recently established. We would like to execute the next supplementary budget promptly and appropriately and take necessary measures flexibly, including the utilization of the remaining 2.7 trillion yen of reserve funds. "