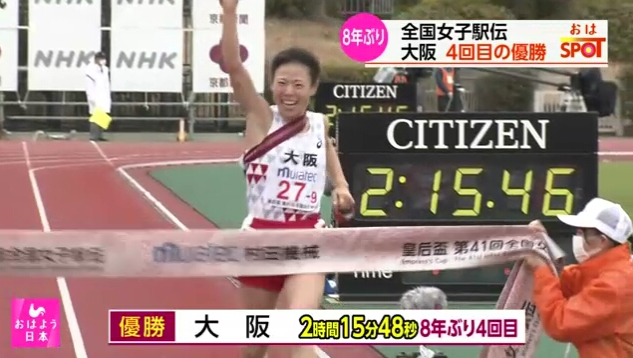 Niiya Hitomi won the Houston Marathon in the US state of Texas on Sunday, with the second-fastest time on record for a Japanese woman.

Niiya finished the race with a preliminary time of 2 hours, 19 minutes and 24 seconds, just 12 seconds behind of the record set by Noguchi Mizuki at the Berlin Marathon in 2005.

Niiya took the lead with her trademark aggressive style and reached the halfway point more quickly than Noguchi did when she set the Japanese record.

Niiya appeared to be on her way to setting a new record, but slowed down slightly after the pacemakers left toward the end of the marathon.

Niiya says it was a tough race, but she was able to enjoy it from start to finish thanks to the cheers from her supporters.

Niiya is 34. She holds Japan's national record for the women's half marathon and the 10,000 meters. She took part in the women's 10,000 meters at the 2021 Tokyo Olympics and reverted to the marathon last year.

The previous second-fastest Japanese record of 2 hours, 19 minutes and 41 seconds was set by Shibui Yoko at the Berlin Marathon in 2004.