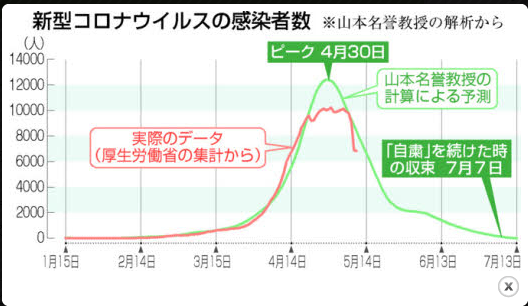 If self-restraint is continued

Regarding the infection of the new coronavirus that seems to have exceeded the peak, Professor Emeritus Professor Tamiji Yamamoto (Environmental Prediction and Control Science) of Hiroshima University predicts that if "self-restraint" is continued, it will converge once in early July. Analyzing the epidemic situation, he explained that he was able to achieve "80% reduction in contact" from a month ago. Even if economic activity becomes active, the number of infected people will decrease if they wash their hands and wear masks.

Professor Emeritus Yamamoto set that one infected person will pass to 2.5 people when no preventive measures are taken and analyze the incubation period as 5 days and the period from onset to spontaneous healing as 10 days. By May 10, the data of infected and dead persons actually confirmed by inspection, entry situation, recovery process by treatment, etc. were also incorporated into the formula, and from January 15th when the first infected person in Japan came out 6 Calculated for months.

Based on this analysis, by mid-April when the emergency declaration was issued nationwide, the number of people infected by one infected person was already about 0.2, and "90% reduction in contact" was achieved. The number of infected people at each point calculated was "almost the actual number," says Professor Emeritus Yamamoto. The actual measured value at the peak of April 30 was lower than the calculated value because it seems that infected people can be detected and treated faster, and the spread of the infection has become difficult.

If "self-restraint" is continued, the number of infected people nationwide on July 7 will be about 100, which is 1% of the peak time, and the infection will almost stop. By that time, it is estimated that there will be about 840 deaths.

However, in the future, economic activity will become more active and contact opportunities will increase. Professor Emeritus Yamamoto said, "It is likely that the actual convergence will go ahead." Increase can be prevented.”