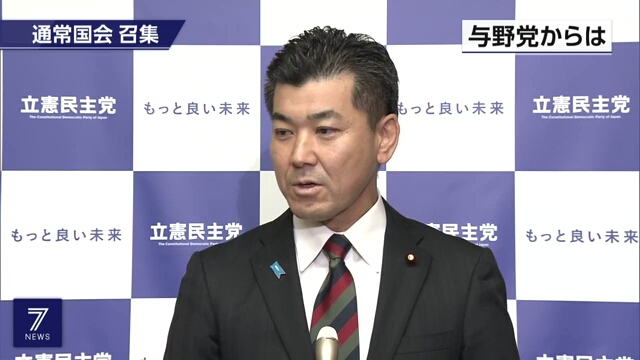 Constitutional Democratic Party President Izumi Kenta says he wants to know why only the defense budget is allowed to increase sharply, given limited funds in the national coffers.

He also says Kishida sounded as if he were going to tackle the country's declining birthrate from square one, when this is something his Liberal Democratic Party has failed to deliver over the past decade.

Fujita Fumitake, secretary-general of Nippon Ishin Japan Innovation Party, says Kishida said the government will transform its security policy. He says that also requires transformation of ideas on how this will be funded, including revenues and expenditures.

Japanese Communist Party Chairperson Shii Kazuo says the public will not accept Kishida's idea of security policy transformation because he has offered no explanation of it. Shii says Kishida's idea involves acquiring the capacity to attack enemy bases and the unprecedented expansion of Japan's military power.

Democratic Party for the People President Tamaki Yuichiro says he has learned that Kishida's unprecedented measures to tackle the declining birthrate has no specifics so far. Tamaki says his party will delve into the issue through deliberation.

He also says Kishida's call for higher wages is a good idea but weak on specific measures. He says his party will propose specific measures to him on the thinking that seeking solutions together is better than confrontation.