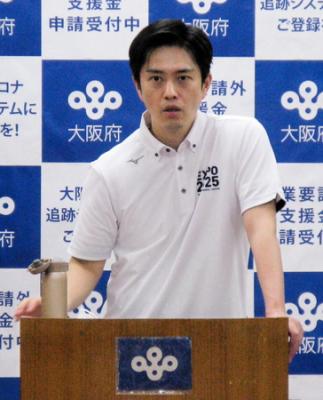 Governor Yoshimura asked the difference between Tokyo and Osaka in the spread of infection.

Governor Yoshimura of Osaka Prefecture held a regular meeting at the Osaka Prefectural Office on the 3rd. On the 2nd in Tokyo, he commented on the rapid increase in the number of infected people, including 34 new cases of new coronavirus being confirmed.

When the reporter asked, "I have increased in Tokyo, but not in Osaka. What is the difference between Tokyo and Osaka?" He said, "I don't know," and said, "One is the size of a big city. The difference is that Tokyo is a city with 13 million people (Osaka is 8.8 million people) and the other is that it has characteristics of Osaka and Kansai people (though Osaka people are said to be free people). I think if there is a disaster or crisis management, there will be "prefectural citizenship" or something like that, in which we will work together as one."

Regarding the situation of Tokyo, where the number of infected people is increasing rapidly, I told them that they should not be reluctant to say, "It's okay for Osaka to happen anytime." I think that it will happen. Assuming that, I do not think that zero in Osaka will continue for a long time," he explained that Osaka is taking similar measures and is taking measures.