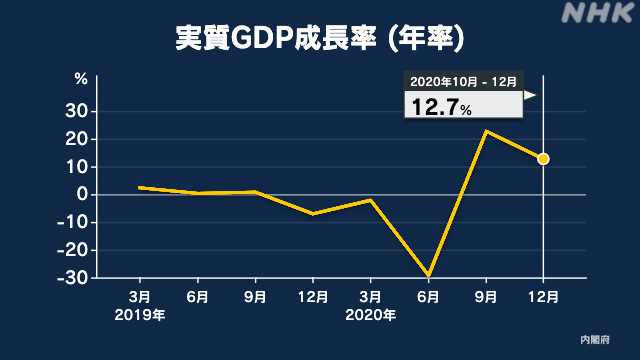 GDP for the year from January to December last year was minus 4.8% compared to the previous year, excluding price fluctuations, the first time in 11 years since 2009, the year after the Lehman shock, it became a minus.

Looking back quarterly, from January to March, when the infection began to spread, it was minus 2.2% on an annualized basis. From April to June, when the first state of emergency was declared, it was minus 29.3%, the largest decline. After that, from July to September, there was a reaction to the previous period, and it increased significantly to 22.7%.

And from October to December announced on the 15th, the "Go To Campaign" boosted personal consumption, and the movement of corporate capital investment returned, so it increased by 12.7% for the second consecutive term. It became a plus. However, over the course of the year, it was minus 4.8% compared to the previous year, the first minus in 11 years, showing the magnitude of the impact of the new coronavirus on the Japanese economy. Annual GDP, excluding price fluctuations, fell by 5.7% in 2009, the year after the Lehman shock, the largest decline since 1995 when it can be compared.

Meanwhile, last year's GDP, when the coronavirus infection spread, has fallen historically in many parts of the world:

▽ In the United States, the growth rate of real GDP for the last year was minus 3.5%, the largest drop in 74 years since 1946, immediately after World War II.

▽ In 19 countries in the euro area such as Germany and France, it was minus 6.8%, the largest drop since 1996 when statistics began to be collected.

▽ China maintained positive growth of + 2.3%, but the growth rate remained at the lowest level in 44 years since 1976 when it became negative.

GDP reveals how much production and consumption activity was carried out in Japan during the three months from October to December last year, and how the economy as a whole grew. Economic activity is now being braked by the re-spread of infection, but looking at various economic indicators, it can be seen that the economy was recovering during this period, albeit tough.