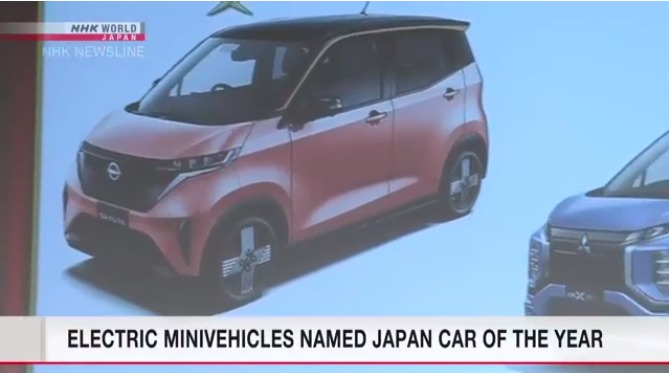 The Japan Car of the Year has been awarded for the first time to electric minivehicles. Two models were selected from all the cars put on the domestic market in 2022.

The 43rd award went to the Sakura and the eK X EV. Both were jointly developed by Nissan Motor and Mitsubishi Motors.

The selection committee says the models adopted the standards of minivehicles in order to produce reasonably-priced electric cars, which increases the chances of EVs gaining popularity in Japan.

This year, foreign automakers such as Mercedes-Benz and Japan's Toyota and Subaru put EVs on sale.

Research firm MarkLines says a record 39,000 EVs, excluding Tesla vehicles, were sold in the Japanese market between January and October this year.

That's nearly triple the figure from a year earlier and surpasses the total for all of 2021.

Chinese automaker BYD is expected to put an electric passenger car on the Japanese market next year.
Other automakers are likely to develop models as competition in the EV market heats up.