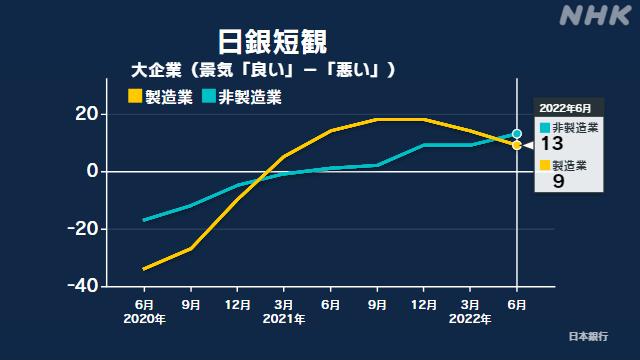 According to the Tankan = Corporate Short-term Economic Observation Survey released by the Bank of Japan, the index showing the economic judgment of the manufacturing industry of large companies was plus 9 points, 5 points lower than the previous time, and deteriorated for the second consecutive term.

This survey was conducted from late May to June 30, and the index of the manufacturing industry of large companies was plus 9 points, which was 5 points lower than the previous survey in March, marking the second consecutive quarter of deterioration. This is mainly due to the fact that raw material prices have risen further due to Russia's invasion of Ukraine, and that it has been difficult to procure parts due to the strict restrictions on going out in Shanghai, China, which continued until the end of May.

On the other hand, the economic judgment of the non-manufacturing industry of large companies was plus 13 points, which was 4 points higher than the previous time, the first improvement in two quarters. Since the priority measures such as prevention of spread were lifted, the service industry such as eating and drinking and lodging has been picking up.

In the outlook three months from now, large companies and manufacturing industries are improving by one point from the view that the supply shortage of parts will be resolved.

In the non-manufacturing industry of large companies, expectations are rising for a recovery in consumption due to the normalization of economic and social life from the new corona, but it has been flat due to concerns about soaring raw material prices.