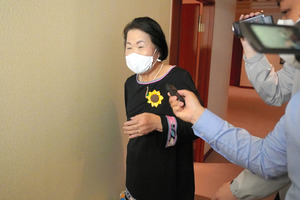 Regarding the House of Representatives election in July last year, former House of Representatives suspect Katsuyuki Kawai (57) = leaving the Liberal Democratic Party and his wife, House Member of the House of Representatives Susato Susato (46) the same violation of the Public Offices Election Law (acquisition) ) In a case where he was arrested on suspicion, Hideko Town Council (78) of Shigemasa in Fuchu-cho, Hiroshima Prefecture, who remarked that Mr. Abe was told "from Mr. Abe" and was given cash, resigned on the 29th. This is the first time for a local lawmaker to resign after witnessing the receipt of cash. At the Fuchu-cho assembly plenary session held on the morning of the 29th, the resignation request submitted by Shigemasa-cho as "personal convenience" on the 26th was unanimously accepted.

Since Shigemasa-cho has been interviewed so far, in May of last year, at the office of Representative Satoshi in Hiroshima city, it was said that Mr. Abe (Shinzo) had handed him an envelope containing 300,000 yen. He said he was given the name of the prime minister and could not refuse, and he could not refund. He served as the female director of the LDP's town branch and was the chairman of Parliamentary Representative Satoshi in last year's Upper House election. Of the 94 people who were alleged to have been arrested by Kawai and his wife for cash distribution, Mayor Shinji Kosaka (71) of Akiota Town, Hiroshima Prefecture, resigned in April. Mayor Yoshinori (73) of Mihara City, the same prefecture, also submitted a petition for resignation to the chairman and announced his resignation on the 25th.